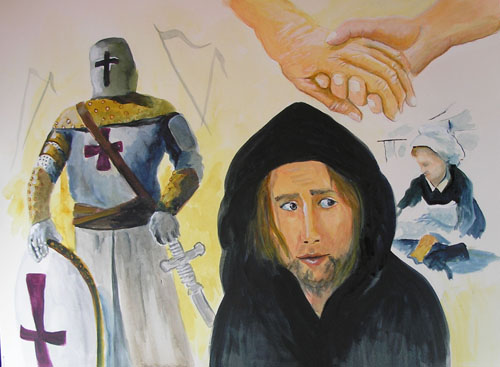 "Science" watercolor painting is 12 X 16 inches.   This painting was for an Art Right Now Meetup group where a noun (we all put one in) is picked out of a hat for the subject of the next meeting (once a month).  Nursing is a science, but medicine is not an exact science so it's also an art with skill developed in practicing it.    I myself am a retired nurse, and in recognition of Nursing Week (May 6th - 12th, 1990) at Rhode Island Hospital I prepared three cases in our Ambulatory Patient Center about the role of nurses during war time (the Gulf War had just ended, or was in the process at the time.)   I titled them "Nursing:   The oldest Art, the youngest profession"   My mother who worked in the hospital took the photos below of the work....otherwise I would have no record of the work I did.....thanks Mom!......there was lots of research involved with some interesting findings.  The first nurses in combat were the Crusaders, out of which the  Knights Hospitaller were established.   I recently found this site with some information if your interested, but the major source of the information for this display were books in the hospital library.   One of the things I found out was Walt Whitman was a nurse during our civil war.  The man with the hood in my paintin (and in the first case in the photo)  represents a sorcerer who practiced the art of healing many times being accused of being witches as a consequence.  During the dark ages nursing was performed by prostitutes. 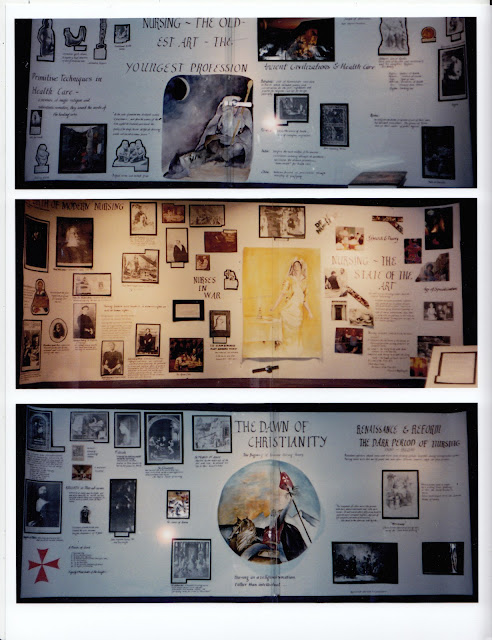 In the presentation above I used a lot of copies of original photos from the different eras, or paintings of the period and the three centers are paintings that I did.

Nurses are the heart of healthcare.  ~Donna Wilk Cardillo

Please see the paintings purchasing information for some general information about pricing, or email me at bunnygriffeth@gmail.com and I will get back to you as soon as possible.

May 09, 2021
SHIHZU DOG original watercolor painting is 7 x 5 inches.  For purchasing information, or to view my gallery please click here . Dogs speak, but only to those who know how to listen. Ohan Pamuk
Post a Comment
Read more
CONTACT : bunnygriffeth@gmail.com