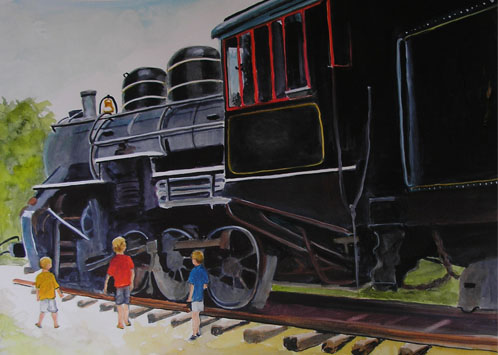 Passing Inspection watercolor painting is 12 x 16 inches on Arches 140 lb paper.   This was done for an Meetup art group Art Right Now for this coming Tuesday.  Unfortunately, I won't be able to attend as in conflicts with an art auction I am attending.   They pick a word from a hat (everyone at the meeting gets to put their favorite subject word in) and this month's was "gears".   My grandsons are just fascinated with trains and the workings....  I have another painting which I'll post tomorrow for this same subject.   Who knew?  And speaking of little boys.....

Boys in my House
Author: Erin Jo Kilmer
There are boys in my house - and Spiderman shoes
And 200 papers in various blues.
There's Bob (he's a builder) and Thomas the Train,
There's a fireman coat to wear in the rain.
They have cars on their shirts and frogs on their hats
There's a glove and a ball and a red plastic bat.
There's dirt on a face and a smudge on a nose;
Grass stains on knees and sand between toes.
There's bathtime at night with bodies to scrub,
And when we're all done there is dirt in the tub!
There's bandaids and bruises and curious bumps,
There's smiles and laughter and sometimes there's grumps.
There's odors most icky; there's boogers so green
There's more yucky things than I'll ever get clean.
There's piles of laundry; there's stories at night;
There's bedtime and bathtime and dinnertime fights.
There's cars and there's trains and there's books about trucks
There's Scoop, Lofty, Dizzy, and Travis, and Muck.
Sometimes there are bugs, and sometimes there are frogs;
Sometimes they are lions, or dinos, or dogs.
There are cute little vests and darling neckties
Dragged right through the mud - oh what a surprise!
There's running and climbing and jumping and falling
And laughing and crying and hugging and brawling
And rolling and losing and finding and creeping
And whining and stealing and sometimes there's sleeping.
There's tantrums and time outs and extra loud noise -
There's love in my house shaped like two little boys

Please see the paintings purchasing information for some general information about pricing, or email me at bunnygriffeth@gmail.com and I will get back to you as soon as possible.

October 11, 2020
Green Sea Turtle #2 original watercolor painting is 6 x 7 inches. The beach is in our blood.   Everyone in our family returns to the beach instinctively, just like the sea turtles.  Sandy Archibald
Post a Comment
Read more
CONTACT : bunnygriffeth@gmail.com