This is a 5 X 7 " watercolor on Fabriano 140 lb paper, from a Wet Canvas weekend drawing event image. The challenge was to see different colors in the images....and I tried with the skin tones to intensify what I saw.

Thought for today is from Robert Frost.....

"Our very life depends on everything's
Recurring till we answer from within."

Happiness is an "inside job". Most of the time, we can be as happy as we decide to be.....from "Courage to Change".
Posted by Bunny's Artwork at 8:00 AM No comments: Links to this post


This was a weekend "Paint Rhode Island" plein air event with the Watercolor Society. The day was reaching into the high 90's and the humidity was awful, and I was the only one there.....but did manage to get some great photos, which I then painted in my air-conditioned studio.

The sky, of course, did not look like this...there needed to be more drama against this beautiful building.

Thoughts on struggling...whatever it might be.
"A stonecutter may strike a rock ninety-nine times with no apparent effect, not even a crack on the surface. Yet with the hundredth blow, the rock splits in two. It was not the final blow that did the trick, but all that had gone before."
...from "The Courage to Change" Al-anon book.

But, what if we give up at two, or half dozen, or 45....you get the picture. And I leave you with this quote:
"Most of the important things in the world have been accomplished by people who have kept on trying when there seemed to be no hope at all."
....Dale Carnegie
Posted by Bunny's Artwork at 7:45 AM No comments: Links to this post

Email ThisBlogThis!Share to TwitterShare to FacebookShare to Pinterest
Labels: Cityscape Please email with questions or if you would like to purchase.

"Keep your face to the sunshine and you cannot see the shadow."
....Helen Keller
Posted by Bunny's Artwork at 10:50 PM 1 comment: Links to this post That's the title of the reference photo from Roger at the Wet Canvas site. This is an 11 X 15" watercolor on 140 lb Arches paper for the weekend drawing event...all pictures from Italy.

Please email me if you would like information on purchasing at bunnygrffeth@gmail.com

Do not go where the path
may lead, go instead where
there is no path and
leave a trail.

Posted by Bunny's Artwork at 8:51 PM No comments: Links to this post

Email ThisBlogThis!Share to TwitterShare to FacebookShare to Pinterest
Labels: Cityscape This is a 10 X 14" Watercolor on 300 lb Arches paper.
$210 framed
If you have any questions or would like to purchase, please email me at bunnygriffeth@gmail.com

"Be careful what you think because your thoughts run your life."

We are not victims of our thoughts.... we get to have a vote. The key is being careful what we think.

Posted by Bunny's Artwork at 8:56 PM No comments: Links to this post This was a Wet Canvas weekend drawing event challenge - to take one of the photos from Italy with people and use a few strokes to describe them. I tried this on a 14 X 20" watercolor paper so I'd be more inclined to stay looser.

I went to Roger Williams Memorial Park this morning to meet with some others from the Rhode Island Watercolor Society to do some plein air painting. The weather today is very hot and humid ....long story short, I was the only one there, besides a few homeless folks. I got some great photos for painting in the hour I waited, but didn't stay by myself. The a/c in my studio called.....

"To stimulate creativity, one must develop the childlike inclination for play and the childlike desire for recognition."
...Albert Einstein
Posted by Bunny's Artwork at 7:04 PM 1 comment: Links to this post This reminds me of Eva Cassidy's "Fields of Gold"...what a beautiful voice she had. (On the playlist at the bottom of my blog if you scroll down.)
Watercolor, 7.5 X 11" on Arches 140 lb paper.
$124 with double mat, archival quality foamboard backing, frame and plexiglass.
For information regarding this or any of my paintings, please email me at bunnygriffeth@gmail.com
Posted by Bunny's Artwork at 9:23 PM 2 comments: Links to this post "Courage is rightly esteemed the first of human qualities... because it is the quality which guarantees all others."
...Winston Churchill

"Always give without remembering and always receive without forgetting. "
.....Brian Tracy This is a 10 X 14" just finished last night. The eagles are from a photo I had taken at the Roger Williams Zoo. I wanted to have it done in time for the 4th of July but was side-tracked by another project.

"Our country is that spot to which our heart is bound. "
...Voltaire

"...but those who hope in the LORD
will renew their strength.
They will soar on wings like eagles;
they will run and not grow weary,
they will walk and not be faint."
Isaiah 40:31
Posted by Bunny's Artwork at 8:09 AM No comments: Links to this post Reference photo from Wet Canvas... a very inviting scene.... come and stay a while....cup of tea or coffee maybe?

For some, the invitation becomes a source of torment.

Some interesting thoughts on a serious huge problem of eating disorders from "Father Hunger...Fathers, Daughters and the Pursuit of Thinness" by Margot Maine, PhD.....

"Part of the problem is that the two sexes learn to experience life so differently....we teach men to fear, distrust and deny feelings, we give them few opportunities to be emotionally open to others. ....for many men, sex is the only time they feel permission to be close. So, as the typical father watches his global girl mature and become increasingly sexual, he may be worried about boundaries and withdraw....

When a father responds by withdrawing and being aloof, his daughter suffers from low self-esteem, and her confidence in her sexuality is undermined .....

Women who develop eating and body image problems sometimes perceive that their parents, especially their fathers, are conflicted about sex, or disapprove of it. These young women begin to feel that their bodies are disgusting and their impulses are immoral. They use self-destructive eating to achieve a less sexual body and diminish their guilt."
Posted by Bunny's Artwork at 3:22 PM No comments: Links to this post My thought for today is from Joel Olsteen and his book Your Best Life Now...talking about letting of the past, he says one of the keys to moving forward to the great future God has planned is learning how to overcome disappointments.... and who hasn't had those.... In the words of A.W. Tozer, "To let go is surrender; to let God is belief."
Knowing that God is fighting your battles, you can release pain and hurts. "Bitterness imprisons life; love releases it."....Henry Emerson Fosdick.

That especially concerns what we've done ourselves by our own poor choices. Those are sometimes the hardest to forget. Olsteen says, 'You may feel disqualified from God's best, convinced that you must settle for second best the rest of your life because of the poor decisions you made. But friend, God desires your restoration even more than you do! '

Dorothy Bernard is quoted as saying, "Courage is fear that has said its prayers." It takes courage to look at your mistakes, shake them off and go on----ask anybody in recovery from alcohol or drugs.

And I will leave you with one last Scripture....from Philippians 3:13.... from Paul. who had originally been an enthusiastic opponent of Christianity and a murderer of Christians. He had to forget his past once he had a personal encounter with God:

"Forgetting what is behind and straining toward what is ahead, I press on toward the goal."
Posted by Bunny's Artwork at 7:45 AM No comments: Links to this post A cat lover....especially one with attitude..... I couldn't resist this Wet Canvas weekend drawing event image. I even gave him the "fire and brimstone" background! This is a 7 X 10" watercolor on Arches 140 lb paper.

"The artist fills space with an attitude. The attitude never comes from himself alone."
...Willem de Kooning

Posted by Bunny's Artwork at 7:00 AM No comments: Links to this post

Magical Adventure  by author and illustrator Bunny Griffeth is available on Amazon or from here.   You can email me to let me know h... 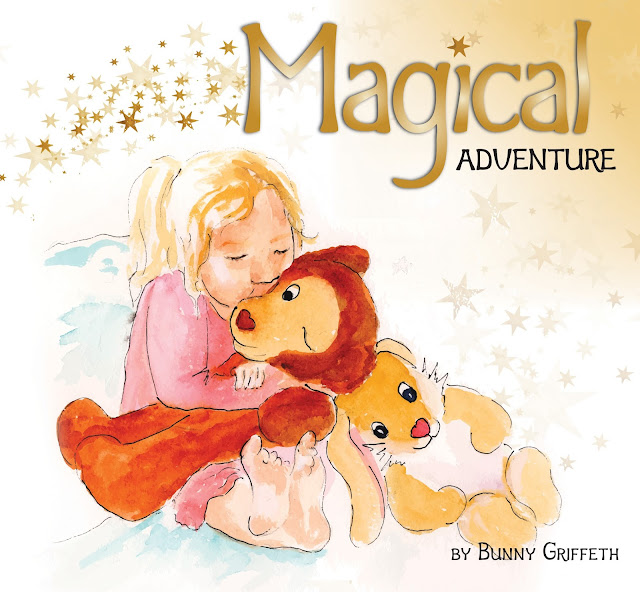 Caring for a Watercolor Painting

Watercolors need to be matted so they do not touch glass or acrylic, preferably a UV non-glare glass for best viewing. The mat and foam board backing should be acid free.