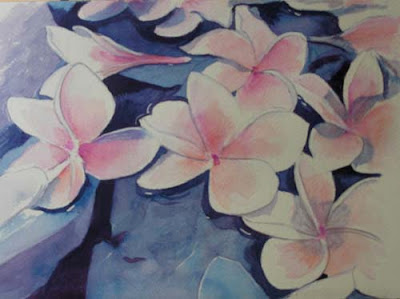 This is also from a reference photo on Wet Canvas from a weekend drawing event.

Thoughts on how to make a failure into a success:

"Somerset Maugham wrote a story about a janitor at St. Peter's Church in London. One day a young vicar discovered that the janitor was illiterate, and fired him. Jobless, the man invested his meager savings in a tiny tobacco shop, where he prospered. He then bought another, expanded it, and ended up with a chain of tobacco stores worth several hundred thousand dollars.
One day the man's banker said, 'You've done well for an illiterate, but where would you be if you could read or write?'
'Well,' replied the man, 'I'd be janitor of St. Peter's Church in Neville Square.'" ..... from "Failure is Written in Pencil" by David Ireland.

I think about the story of Elijah at the river, depressed and upset because the queen has threatened to kill him because he called on God and fire came down from heaven showing Baal a false god and the whole group of priests that God is God. So God sends ravens to feed him and he has plenty of water until the river dries up.

Do you have a river that's failing you now? Maybe God's telling you it's time to move on.

October 11, 2020
Green Sea Turtle #2 original watercolor painting is 6 x 7 inches. The beach is in our blood.   Everyone in our family returns to the beach instinctively, just like the sea turtles.  Sandy Archibald
Post a Comment
Read more
CONTACT : bunnygriffeth@gmail.com